Tips and Guidance for the Young Cook: Student Profiles at the Le Cordon Bleu School 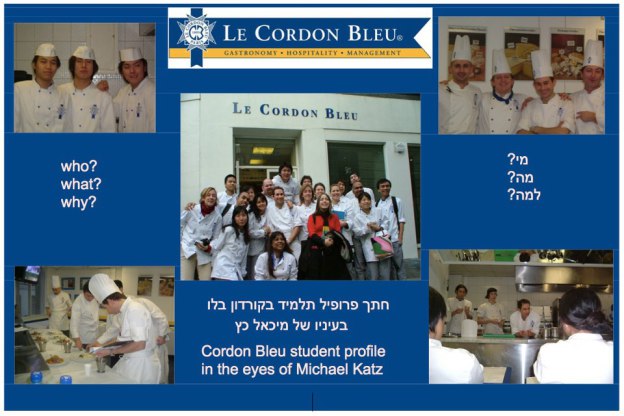 There is no one way to learn cooking—there are more than a few routes that a young cook can take to reach amazing achievements (in any case, there are no shortcuts—certainly not reality shows). Some ways are more conventional, others less so; there are those that include schooling and those that include only work—but today the trend is to go somewhere to learn in an organized fashion.

The dream to study at a prestigious culinary school abroad is a dream felt by many cooks, around the world. I often sit with young cooks with the goal of trying to help them, to direct them in finding the educational path that will most suit them, this facts gives me more and more understanding of whats are the needs of the young generation.

More than once, I’ve been asked by cooks that are faced with studying abroad: “Who goes to study at schools in countries such england, france, spain and even united states and other?” So here is a short article that I wrote on the subject, but it references specifically one school, since I happen to know it well from the inside, as a teacher.

Everything that I write in this post is based upon what I saw and experienced between 2003-2006, as a full-time teacher at “Le Cordon Bleu” in London, and is based upon my understanding and my judgment.

I’ll begin with a small anecdote.

The school opened in 1895 as a means and a platform for preserving French culinary culture. The origin of the school’s name, who opened it, and other elements of its history, I’m happy to write about further in the future. For now, it’s irrelevant. What is important for me to note is that the goal of the school when it was just starting out was to show the people of the world what French cooking really was.

Not by accident, until the late 1970s the “profile” of a student at Le Cordon Bleu was a “jet setter.” This was a static population, mainly women who enrolled to pass the time while their robust husband worked hard as a state employee, banker, industrialist, etc. In the 1980s things began to change, and the school succeeded in absorbing students who saw it as an institution that would provide them a profession with which they could enter the labor force.

The degree: until a few years ago, the school’s diplomas weren’t recognized by any organization or state. The school’s reputation simply preceded it.

In 2003, I was accepted as a faculty member at the school at its London branch. I taught there until 2006, and I was one of four teachers in the cooking course. In the pastry course, there were another three teachers. According to the contract at Le Cordon Bleu, teachers may only work at the school—they are not allowed to teach, cook, or host events outside the school. The work as a teacher is around 10 hours a day. There is no hierarchy, every teacher teaches every area of the course in which they teach. The cooking instructors taught only cooking, and the pastry instructors taught only pastry-related subjects. Two separate worlds.

Jet setters—I refer in this group to men and women who came more to pass their time, or for their spouse, or for a love of food. In general, these students fought tooth and nail and wanted to succeed. They had means, and thus could afford to train all the time at home. These students represented around 15% of the students during my time, and came from all around the world.

Restaurateurs—people who owned a restaurant and felt that they also wanted to see things from the other side and to know truly how to manage a kitchen. Most were English, Irish, and Scottish. They were less interested in excelling in their studies. They were, however, highly interested and motivated to know as much as possible about the processes and to understand everything in order to connect with their chefs. An additional agenda of theirs was to free themselves from the fact that the chef always got the last word regarding what happened in the kitchen. They composed 10% of the students.

The Lost Student—These were students who hadn’t found themselves in any other framework and had means to come and study. They mainly came from Australia, England, and the United States. Most were not highly motivated and came to pass their time. But, there were some who proved surprising, who tried hard, who internalized the field fully and really succeeded. They composed 10% of the students.

The Runaway—In this group, I mainly refer to Japanese girls, mainly the family’s only child or the youngest of the family. Their motive was their lack of desire to remain in Japan and take care of their parents. It was a group characterized by incomparable diligence, who would do anything in order to succeed—the key for them was to succeed and not return to Japan. They were around 5% of the students.

The student who wanted to be a chef—This was the largest group, and represented around 60% of the students. Their goal was, of course, to be chefs. As a teacher, I explained to them that you did not leave the school as a chef or even always as a cook. The school’s role was to provide tools to deal with the real world. These students came from all over the world: Japanese, Koreans, Americans, Israelis, Saudis, Mexicans, and more. Those who could afford to study and live in London chose the London branch of the school. Most were competitive, mainly amongst themselves, and most worked during the week, mainly at good, well-regarded restaurants. Most spoke of opening their own restaurants with time. As far as I know, around 25% of them remained in the profession in some capacity.

A little about the method of study: at every stage—basic, middle, and advanced—the student passes thirty demonstrations. In each, the teacher explains the dishes for three hours in an auditorium, and for another two and a half hours, the students work individually to reconstruct some of the dishes in the actual kitchen.

There is a lot more to tell that cannot be included here, but again, this was the student cross-section in a nutshell, and a little about the study at Le Cordon Bleu.