Tip / Guidance for the young chef: “Mushroom Duxelles”—another building block to add to the collection

Posted on October 17, 2015 by chefmichaelkatz

My view of the kitchen, and my joy, has always been to add “building blocks” to my repertoire, and they are numerous. I will make use of them to direct the young generation how to assemble them and create using them.

For me, “building blocks” are basic things from which you can branch into endless variations, like white wine sauces, broths, basic recipes like tapenade, mayonnaise, béchamel, and many more that over time will grace this stage.

A few days ago, Doreen, my sous chef, and the rest of my staff went back to work on another building block in the kitchen. It is called “mushroom duxelles.”

The dish’s name has a nice origin story: the invention of the duxelles is credited to the chef Francois Pierre La Varenne, on behalf of his employer, the Marquis Nicolas Chalon—the marquis of Uxelles, a region in France. Many successful dishes in history have been named, interestingly, after the person for whom the dish was invented. For example, “Peach Melba” was invented to honor the opera singer Nellie Melba.

In fact,if i have to define it i think the easier way is to describe it as a  “stew” created using through the technique  which i can describe as “semi steamed” with mushrooms, shallots, butter, salt, pepper, lemon juice, and parsley.

Today there are endless variations to making duxelles utilize different levels of chopping and cutting the  mushrooms: into “Brunoise” (in general 2x2mm cubes), finely chopped, and more—plus, there are both wet (the mixture is cooked but not all the liquids are allowed to evaporate) and dry varieties.

Why is it an important/good “building block”?

It has a wonderful flavor and fine texture—it goes well with many forms of meat (it is possible to find duxelles in one of the layers of the magnificent “Beef Wellington”). It can be added to different stuffings—in meat, ravioli, vegetables—or be used as a coating for grilled fish, or as an addition to red wine sauces, broths, cream sauces, and butter sauces. I can go on…

We used it as a stuffing for fish in a Roquefort cheese sauce (last picture below), and more.

We sautéed  two finely chopped shallots in a little butter  (you can replace the shallot  with onion, red onion, scallions), then added around 400g of button mushrooms chopped to classic brunoise size.

We mixed it well and added a little salt and pepper (salt eliminates a little liquid from the mushrooms, and in this case that is desired—similarly, adding salt, when possible always preferred at the start of a recipe, especially with soups and sauces—it is better absorbed and better develops the taste of the dish).

The next step is to cover it with parchment paper. This method of covering is called “cartouche”—the idea is to allow the vapors to be released slowly while creating pressure on the substance being cooked—which is why I call the process ”Semi steamed ”—in our case we left it 5-6 minutes on medium heat.

For the next step, we uncovered the cartouche and cooked the stew on a high flame, only to vaporize the rest of the liquid, we added a little lemon juice and a tablespoon of finely chopped parsley (Lemon, parsley, and mushrooms is a “Catholic wedding” for me—I almost always use the three together).

I hope that I managed to explain it all clearly—once you’ve understood the idea you’ll be able to make endless variations on the theme, using different mushrooms and textures, and you’ll be able to integrate this “building block” into a limitless number of dishes.

Thank you for reading,
Michael 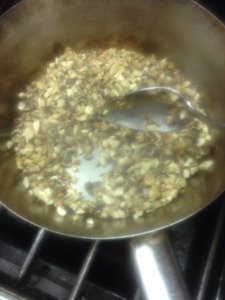