Tips and Guidance for the Young Chef: Making Some Order in the Kitchen—Ceviche vs. Tartare

Posted on January 2, 2016 by chefmichaelkatz

Ceviche: The idea behind ceviche is, essentially, the pickling of the raw ingredient in something acidic—the immersion in an acidic ingredient increases the shelf life of the raw food and provides a different eating experience from eating it raw by softening it.

Ceviche is composed mainly of fish and seafood marinated and cured in lemon juice (there are many variations, but for the moment we will focus on the basics)

The process of curing  something of animal origin, whether it be fish or meat, in an ingredient of high acidity, is actually a cooking process.

Take, for example, an egg: at 63°, the protein begins to congeal, and at 68°, the yolk begins to congeal. In the words of my scientific friend, Na’ama HaLevi, “heat causes the disconnection of weak bonds in the protein molecules that make up the egg, thus changing its spatial structure; this is an irreversible process—and acid has a very similar effect.”

Texture—proper ceviche (when I write here “proper” I really mean what is common) has a soft, melted texture, as opposed to tartare, which is more viscous, depending on the type of raw ingredient and the size of cutting.

The most popular ceviche—otherwise known as the classic ceviche—is the immersion of a raw ingredient (mainly fish or seafood) for between 10 minutes to 12 hours, sometimes more, in lemon juice  (or citrus juice ) )with a little salt. From personal experience, there is no problem with even more than twelve hours—the opposite in fact, sometimes you get very interesting  results (but this is to anyone personal opinion and desecration).

When the raw material is cured, the sky is the limit—you can create endless variations, such as: adding fruit, herbs, different vegetables, different sauces (such as mayonnaise), and more…

A little history: The general opinion is that ceviche originated in Central and South America, mainly in areas along the coast; there are those who consider Peru the origin—the best explanation can be found on Wikipedia.

Tartare is a dish made of a raw ingredient (originally meat) that is generally sliced with a knife only (there are also places that use a meat grinder).

Tartare is mainly served in its natural state, without any spices, and the customer him/herself flavors the tartare with ingredients that are served alongside; or the tartare can be served spiced and mixed with the ingredients directly. A good example is steak tartare in France, which is mainly served plain with an egg yolk on top surrounded by chopped cornichons (small pickled Gherkins), chopped capers, chopped parsley, and chopped, pickled pearl onions; whereas the Belgian variety has those ingredients mixed in with the meat, with the addition of mayonnaise.

It is important to mention that there is a significant different experience in tasting the texture of the tartar if it has been chopped by knife or grind  buy a meat grinder and the reason is that the meet grinder actually kneads the meat in the circulation movement and that provokes the proteins to tighten there bonds and become chewy thats why by chopping with a knife you do not get the tough texture some old schools restaurants there is still maitre dee that prepare the “steak tartar” in-front of the costumer. (here is a great explanation about the behavior of proteins)

Although most tartare dishes use beef fillet as the main ingredient, additional raw ingredients began to be accepted with similar preparation, and today you can find fish, vegetable, and fruit tartare, where the main idea is that a raw, fresh ingredient underwent chopping wit a knife.

A little history: the origin of the name tartare seems to be the Tatar (Tartar) tribe, a Mongolian tribe that was known for its ruggedness and its cruelty. An urban legend tells that pieces of raw meat were placed under their saddles so that after a long ride the meat was so soft that it could be eaten without being cooked. What does seem to be true is the fact that the word “tartar” became synonymous with the word “coarse,” from which “tartar” sauce got its name, because of its rough texture (mayonnaise mixed with chopped cornichons, capers, parsley, and pearl onions), and the name was also applied to the meat dish because of its coarseness.

Tartare appeared at the start of the 20th century in Parisian restaurants, mostly under the name “American Fillet,” mainly from beef or horse meat, though beef was the most common.

An explanation for steak tartare first appeared in Larousse Gastronomique in 1938.

Many restaurants sometime  serve fish tartare under the name “fish ceviche,” usually because of the fact they flavor it with a little lemon but actually serving tartar. (but in the end of the day who cares if it tastes good than the jb is done)

For anyone who wants to deepen their knowledge, here is a somewhat more detailed explanation by the scientist Naama:

The process that protein undergoes as a result of heating or acidity, for example, is called denaturation, in which the protein molecule changes its spatial structure by breaking some of the weak bonds in the molecule (folding). Denaturation and folding are different concepts from that of breaking apart the molecule and recomposing it into a new substance. The protein does not break apart. The process is also not exactly a change of state, as it is defined.

Here is a classic beef tartar (picture taken from the web) 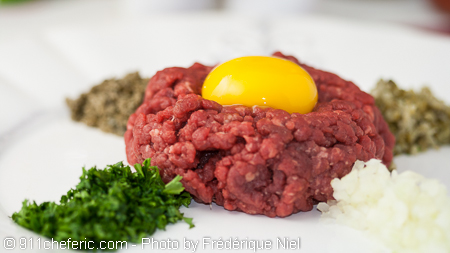 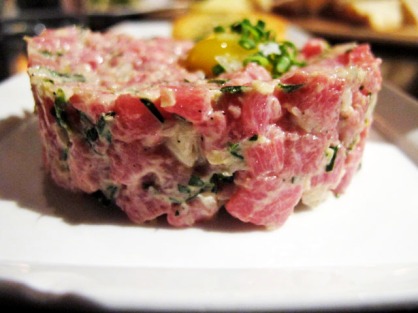 Here are few ceviche dishes from my kitchen

I hope that I managed to clear up some concepts in the kitchen for you.